Login or Sign Up. Join the HC Newsletter. Akai SG01v Vintage Synth module. Previous 1 2 Next. This little module really sounds pretty cool based on some clips I have been hearing. It was released in the 90’s and has some really convincing analog emulations that seem pretty robust and rich sounding.

It has its sounds as ROM samples, and there is not really much editing but the presets that Akai programmed seem spot on and the choice of synths they emulated when they made this is very impressive.

Interesting, I was listening to this little guy on Paolo’s Synthmania site a couple of weeks back. Only thing that seems to be lacking is the number of lead sounds, Minimoog etc, unless i missed something. Looks like a fantastic little box though. I can’t speak to the Akai as I’ve never played one. I was very disappointed with it once I got it and quickly sold it for a huge loss.

It sounded good before I bought it. Not so much when I started to spend time with it. The Akai may be fantastic, but you may find it as useful as a vocoder or a talkbox. Sure the vocoder and talkbox are cool as hell. But you can’t use it very often and if you do, it’s too much. What you’re experiencing with these units is the result of our warehouse crew intentionally “overpacking” this product. Hey, flat earth, yes that is where I heard tha samples, on synthmania.

I thought the bass synth samples were very impressive. I would be looking for something to pair with a Roland PK-5 midi bass controller and I am hoping to get a John Carpenter “Assault on Precinct 16” bass synth sound out of it. One of the presets sounded close, but the example wasn’t representing it in a slower more legato type way as in the soundtrack. But there is a function on it that allows you to configure for legato playing I think.

As far as leads go, I would be using it more for bass synth sounds or mid voiced sounds. Some supposed “lead” sounds I find to sound great in the mid or bass range, at least with other synths. The leads sounded pretty good to me though, although I don’t play synth solos, more lines in combination with bass. Hey McHale, check out the sound samples for the Akai, You might find the Akai more usefeul to you than as a talk box.

I haven’t heard the emu vintage keys, but I think Akai has alot of knowledge when it comes to using sampling to capture the sound of a vintage synth and I think the sampling might be 16 bit so it makes the sound warmer.

Akwi filter on this unit is also supposed to be quite good. I did check out the sounds after the post appeared – I didn’t know this even existed before then and many are VERY usable.

Most are quite good and sound authentic.

I just wonder how limited they are meaning, tweakability of the individual patches. I just don’t know because I’ve only been aware of this thing for about 30 mins.

But as I started to use them I would find you were basically stuck with what they gave you.

There was very little you could do to tailor the sounds to your needs. They do sound good though.

But then again, it’s Akai. Akai has always been top notch. For those curious, here’s the link: It’s always nice to be familiar with gear you could find in a pawn shop or Craigslist. I’ll have to keep an eye out for it now. I used to own one a little less than a decade ago. Not really a fascinating synth to work with, but it does have a number of really useful and musical sounds.

I sold mine because I thought the new VA synths and the softsynths would be much better in ALL ways than anything else and make the other stuff obsolete I wish it hadn’t been a half rack module – I hate to admit being so silly, but had it been twice as big I might have taken it more seriously and actually kept it – it’s not like selling it made me rich Thanks for the thread – a good reminder that I should buy one at first opportunity provided the price is right.

For me, at least, it was a mistake to sell that little guy. Yamaha PSR, 3 meter long Hosa stereo cable jack to phono.

Good luck on your search. We seem to be reviving a real sleeper synth here. Thanks – and yes. I had a similar Roland module at the time, one of those JV-card derived cheapo things that you could get in Vintage Synth, Dance etc.

I akaii it sucked in comparison, and rarely used it. Sound quality was awful, IIRC. 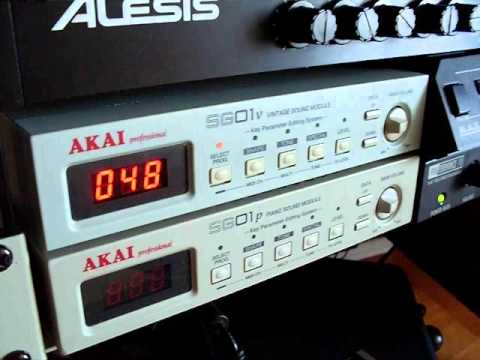 Just been searching and the few I’ve seen are located for sale in Europe. Did they release more of these on the European market? I see them occasionally in the small ads of local papers. No doubt, due to this thread, the value will ‘mysteriously’ start to rise. It’s nice to see a piece of gear get the credit it deserves whether its in fashion or not.

It’s amazing that with all the newer things coming out year after year all the older less hyped up stuff gets lost in the woodwork. That’s the fun I guess.

It tells you that every decade had its unsung heros of talented programmers and sound designers. I’ve been thinking about getting one of these too, also akao to the demos at Synthmania. And I have noticed that most of the ones I come across for sale are out of Europe or Japan.

I’ve heard some demos of the former, but I’ve never heard what the latter sounds like. They seem to be all over Europe, but none here. There are two sg01vv ebay UK I think.

Were more of these released in Europe, I wonder? Help FAQs Go to top. Advertise on the most comprehensive and wkai viewed musicians’ website. View the Media Kit.